Welcome to historic Grand Marais, Michigan! The Grand Marais Historical Society operates three museums and a self-guided walking tour for our visitors’ enjoyment. Come discover the rich history of our area and see what makes our town so special. 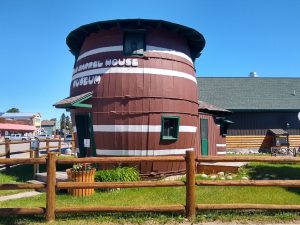 The Pickle Barrel House Museum is located on Lake Avenue right in town. The house is one of the most unique structures in the country. It was built in 1926 as a summer cottage for author/illustrator William Donahey and his wife, Mary. The cottage, which contains a living area, pantry, kitchen, and bedroom, stood on the shore of Sable Lake until 1937, when the house was moved into Grand Marais and placed on the corner of Lake Avenue and Randolph Street. For years it was a visitors information center, ice cream stand, and gift shop, and in 2003 the Historical Society purchased the building. It has been restored to its original condition as a summer cottage of the 1920s. Don’t miss this very special place. Kids especially love it! 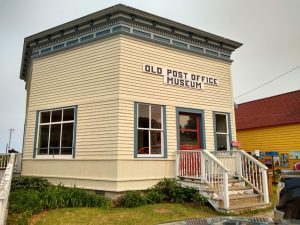 The Old Post Office Museum was built about 1905 as a jewelry store. In 1907 it was added onto and put into use as the Post Office. The unique, five-sided structure served as the town’s hub of mail and information for almost 70 years, and was placed on the Michigan Register of Historic Sites. When the post office moved into a different building in the 1970s, the little building was converted into a gift shop and beauty salon. In 2007, the new owners needed to move the building and donated it to the Grand Marais Historical Society. The town watched anxiously that August as Wolf Creek Excavating moved the entire building onto its new foundation on Lake Avenue.

The Historical Society set to work renovating the building. In the summer of 2008, the exterior got a new roof and some new siding, new front steps, and a fresh coat of paint. In the spring of 2009, the interior was renovated and museum displays were installed. The museum opened to the public on July 25, 2009 and is now a walk-through museum of Grand Marais history, from its earliest days to the present. The museum is open daily in the summer.

The Memorial Rose Garden
In the spring of 2010, the empty lot behind the Old Post Office Museum was transformed into a beautiful rose garden featuring northern-hardy roses especially selected for the climate in Grand Marais. Individual rose bushes were”adopted” in honor of someone, living or deceased. The garden is open daily until dusk.

Art in the Garden
Displayed along a walkway next to the museum and in the rose garden are panels of art and photographs taken by Grand Marais visitors and residents. You will also find a large “wind harp” that sends out soft tones when the wind blows (which is often in Grand Marais!)  Art in the Garden is the result of several generous grants and donations, and can be viewed daily during the summer and fall. 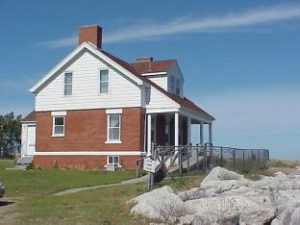 The Lightkeeper’s House, located at the end of Coast Guard Point Road, was built in 1906 by the Life Saving Service as the Lightkeeper’s home. Previous to this, the lightkeeper lived in a homemade shack constructed of scrap lumber; it was described as “a miserable shanty” by the lighthouse inspector. The brick house was a vast improvement. During World War II, the Coast Guard took over the lightkeeper’s duties. Their families lived in the house until the station closed in 1982. The Grand Marais Historical Society received the house in 1984 and began its restoration. Through the generosity of many donors, the museum now contains items that were in use at the turn of the century. Walking through the door is like stepping back in time.

2022 Museum Hours: As we emerge from pandemic restrictions, we have had to make some changes to our operating hours. The Pickle Barrel will be open daily for viewing only, from 1-4pm. Visitors may see the inside of the barrel house through a plexiglass door but the building will not yet be open for visitors due to its small size.
The Old Post Office will be open daily from 1-4pm and visitors may view the exhibits inside.
The Lightkeeper’s House will be closed for the 2022 season, as the National Park Service is making repairs and doing restoration work on the building.

Become a Historical Society member! Dues are $5.00 per year for individuals, $10.00 for families. Download a membership form.